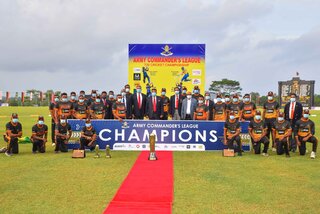 The awards ceremony was held under the patronage of the Army Commander, Lieutenant General Shavendra Silva. The inaugural Army Commander’s T20 league was organized by Sri Lanka Army Cricket committee with the objective of selecting highly talented players and grooming them to the national level. A total of 16 national players were invited to feature in the four teams which strengthened each team’s stature.

DIMO came forward as the sponsor of Southern Warriors led by Dinesh Chandimal to support this initiative of the Sri Lanka Army. Mr. Ranjith Pandithage, Chairman & Managing Director of DIMO, was present at the final. Major Dinesh Chandimal has also been given the responsibility of leading the Sri Lanka Army Cricket Team for the 2020 season. DIMO believes these partnerships play a vital role in enabling Army Cricket to perform better in the coming season.